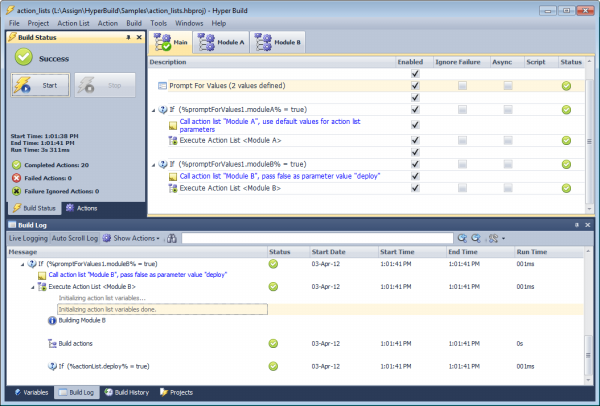 LogicNP Software is pleased to announce the release of Hyper Build 2012 which enables companies, software developers and build managers to automate their software build, testing, deployment and release process. Hyper Build allows you to visually design your build process via an easy-to-use UI. Hyper Build comes with hundreds of built-in actions for the most commonly used tasks and tools. Creating builds has never been so easy and quick!

* Focus On Writing Your Actual Software - Don't Waste Time On Managing Builds!
* Improve Product Release Quality By Using A Repeatable Automated Build Process.
* Easily Design Your Builds Via The UI - No Coding or Messing With Text Files!
* Automate Your Entire Build Process - Save Time And Money!

• Visually Create And Design Your Build Process
Hyper Build focuses on ease-of-use and allows you to create and design your build process visually via the user-interface. The entire structure and composition of your build process is shown visually in a logically structured form and you can change it using familiar UI paradigms like drag-drop, clicking, etc. You do not have to deal with clumsy text files anywhere!

• Detailed Hierarchical Logging
Hyper Build shows you a detailed hierarchical log of the build process including any output generated from external processes run during the build. Hyper Build also allows you to show only failed actions so you can easily focus and examine those actions.

• Advanced Scripting
Hyper Build supports scripting using C# or VB.Net, which allows you to modify, extend or hook into the build process. You can define scripts for each action which are run at various pre-defined triggers during the build process, such as when an action begins execution, ends execution or when it generates a log message, etc. Scripting allows you unprecedented level of flexibility and customization of your build process.

• Easy-To-Use Variable And Property System
You can define project-level or global variables for use in your build process. Further, each action itself exposes a variety of properties which you can use and reference in other parts of your build process.

• Asynchronous Actions
Hyper Build fully supports asynchronous execution of actions which run simultaneously with other actions in the build.

W
Save VB.Net and your Job.