How to build an ASP.NET AJAX Filmstrip Viewer featuring Rounded Image Thumbnails and

This ImageDraw demo - which source code files can be found at the end of this page available for downloading - demonstrates how easily you can use ImageDraw object model and ASP.NET AJAX Framework to design a nice looking AJAX-based Filmstrip Viewer.
The following figure is a screenshot of the ASP.NET AJAX Flimstrip Viewer application that leverages ASP.NET AJAX Framework and ImageDraw technologies. Each thumbnail photo preview is into an ASP.NET ListView control and dynamically scaled with nice rounded corners effect by ImageDraw. When a photo thumbnail is clicked, the original photo is dynamically applied a reflection imaging effect (a.k.a. Glass Table effect) by ImageDraw. 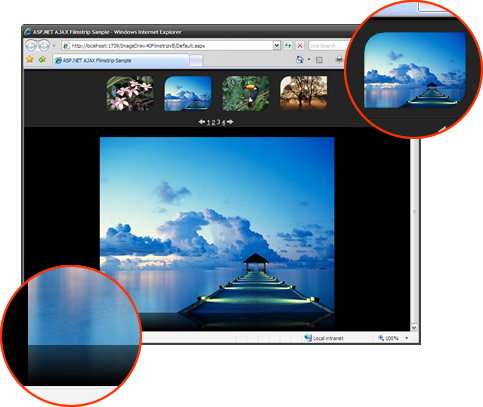 This AJAX Filmstrip Viewer features:
- ListView, DataPager and ImageDraw Data Binding
The thumbnail photos is automatically generated by ImageDraw and data bound to an ASP.NET ListView control. The DataPager control is used for paging purposes in order to simulate other scenarios with more photo files overhead.
- Dynamic Thumbnails Photo Previews
Each original photo is dynamically scaled by ImageDraw to generate thumbnails on the top. In addition to scaling effect, ImageDraw also performs a nice looking rounded corners effect by rounding just top-left and bottom-right corners only.

- Photo Preview with Reflection effect
Each time a user click on a thumbnail, an AJAX asynchronous call is performed which instructs to ImageDraw to dynamically create the Reflection effect (a.k.a. Glass Table effect) on the original image file.

How to Directly Print a Crystal Reports to Default Client Printer from ASP.NET withou

How to add Cross-Browser Printing to ASP.NET ReportViewer toolbar

How to Print an ASP.NET Local Report RDLC without Preview or Printer Dialog