Good day, I am trying invoke a Listview and I can't get it to work.
I am getting the cross-thread error at line 31
Inspfolder is my variable for passing filepath from an excel worksheet.
I manage to get it working if I use:
Process.Start("explorer.exe", String.Format(Inspfolder))
But I'd rather have the whole folder content into my listview if someone can help me figuring how to pass it correcly?

I just realised that it's a ListBox rather than a ListView but I think that everything I said still stands.

The whole point of the Invoke call is so that you don't access members of the control on any but the secondary thread. Think about what that line of code is actually doing. It's adding an item to the ListView BEFORE it calls Invoke. That's no use.

Think about what you're actually trying to achieve. How can that UpdateUI method be of any use there? It expects to receive a control and to set the Text of that control. How does adding items to a ListView relate to that?

Further more, that Add method will add a single item to the ListView. How does it make sense to get an array of file paths and then add that as a single item? Again, think about what you're actually trying to achieve. Break it into steps and then implement each step. I have no idea what algorithm that code would be implementing and I'll wager that you don't either.
Last edited: Jul 10, 2020
Why is my data not saved to my database?
MSDN: Data Walkthroughs | "How Do I?" Videos
My Blog: Custom Events | Data Among Multiple Forms
Beginner Tutorial
Upvote 0 Downvote

Firstly, if the intention is to get a list of file paths and add them each as an item then you need to be calling AddRange rather than Add. Secondly, adding the items is accessing the UI so that needs to be done on the UI thread, That might look like this:

VB.NET:
Of course, you can just use a Lambda and not need the extra methods:

VB.NET:
Why is my data not saved to my database?
MSDN: Data Walkthroughs | "How Do I?" Videos
My Blog: Custom Events | Data Among Multiple Forms
Beginner Tutorial
Upvote 0 Downvote
F

Ok, so I went to read about UI thread and this part much more clear in my head. I did as you mentionned and added:

Now the second part is still vague for me, I tried calling the Invoke inside my 2nd thread with:

I change folderPath for Inspfolder but I got an error. I am going swimming a bit to clear my head a bit and bbl tonight.
Upvote 0 Downvote
F

Getting an error of "Incorrect parameter numbers" (TargetParameterCountException) at line 48
I'm confuse... not sure I can figure this out. Let me know if sending the whole code would help...

To explain what I'm trying to do:

I have an excel worksheet holding a bunch of inspections. Each inspections have a column in which I entered the file path where to find all the related files for those inspections.
Inspfolder is the variable holding that filepath (Exemple: D:\Fred\Souvenirs)

I am trying to show those files in the listbox.

Once I get through this step, I should be close to finish this project.

I am adding a printscreen in case it helps. 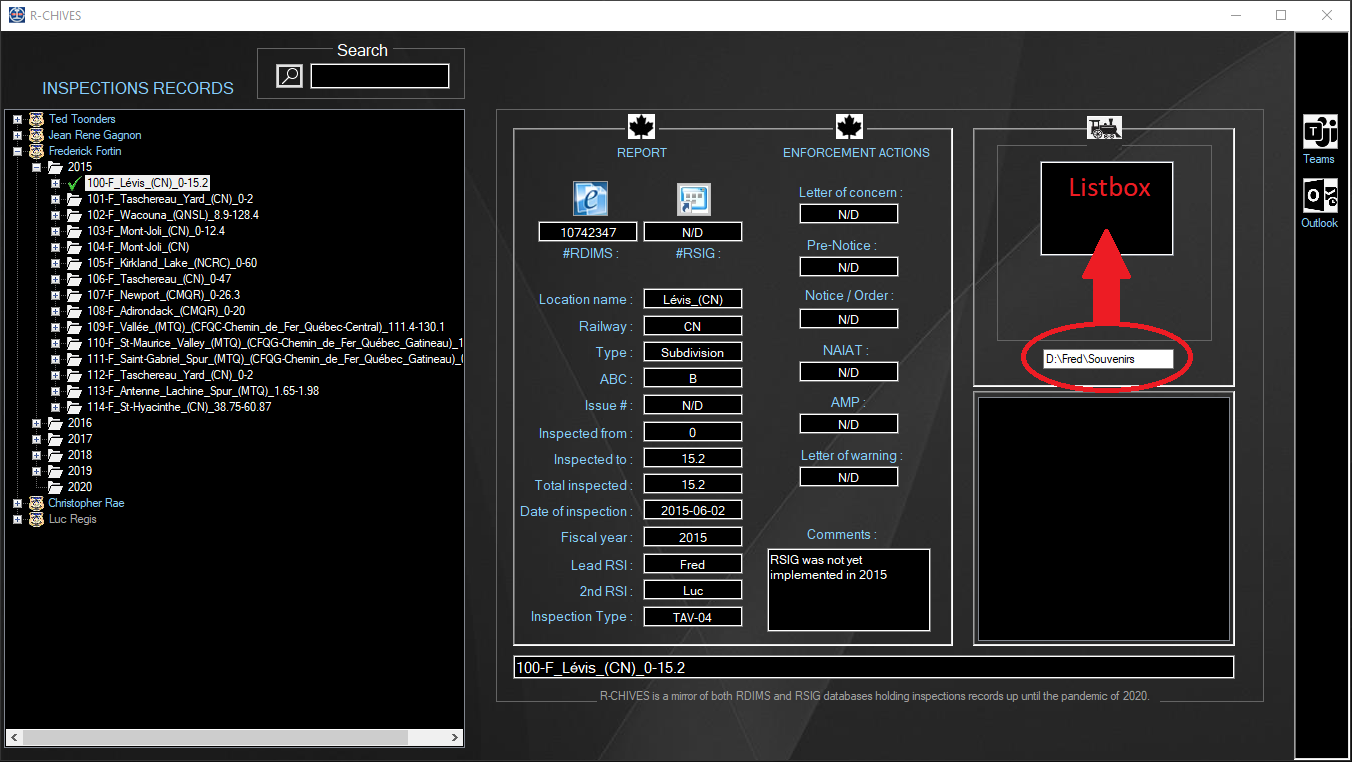 You really need to do a bit of reading on multi-threading and delegates. The basic principle is that there are only a few members of any control that are safe to access on a thread other than the one that owns their window handle, which will generally be the app's main thread. Those members include the following:
A delegate is an object that refers to a method. You can pass a delegate around like you can any other object and then invoke it anywhere. Invoking it means executing the method it refers to, but that can be done in places that have no knowledge of the object the method is a member of.

VB.NET:
You can then call that method anywhere on any thread and it will just work:

Alternatively, you can simplify that method and do the invocation where you call it:

VB.NET:
If you don't need or want such a method to be reusable then you can do away with the named method and AddressOf and use a Lambda instead:

VB.NET:
That can actually be simplified because a Lambda has access the the same variables, etc, as the context it's declared in. That means that there's no need pass variables as arguments because they can be used directly in the Lambda:

VB.NET:
In your case, you should spend some time to understand all this first, to avoid flailing around and trying random stuff and possibly breaking your code even more. Once you understand what's going on, you should decide what is the most logical way to create your delegates. If you find that you're doing the same thing in multiple places then a named method and AddressOf is the way to go. You may choose to go that way in every case for consistency. If you are doing something in one place only then a Lambda is appropriate, but if you use any Lambdas then you should be consistent and use them everywhere unless a named method is specifically beneficial.
Why is my data not saved to my database?
MSDN: Data Walkthroughs | "How Do I?" Videos
My Blog: Custom Events | Data Among Multiple Forms
Beginner Tutorial
Upvote 0 Downvote

It may help to think about threading in GUI apps like you have two rooms:
Only information can pass between these rooms, not controls, because controls are not allowed in the thinking room.
Here's a basic example how this may play out:

VB.NET:
You can expand the "information" to any and all information that needs to be passed to/from these rooms.
Upvote 0 Downvote
F

I have so many questions when I read all this...
I guess I'll give it another try, but this is so over my skills.
Here is what I've done as a 1st step:

It's the only way I understand them for now.
Now, if I stick to what I just did.
My invoke looks like this:

or I can try as you suggested and delete the Delegate and use this Invoke instead:

VB.NET:
But I get the following error: 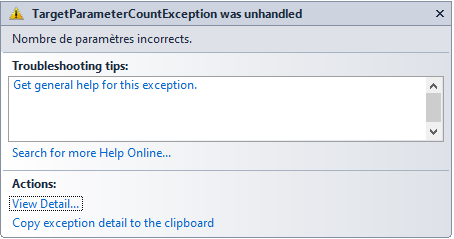 The issue should be obvious, if you've actually read the error message. Why would you think those signatures would be the same?
Why is my data not saved to my database?
MSDN: Data Walkthroughs | "How Do I?" Videos
My Blog: Custom Events | Data Among Multiple Forms
Beginner Tutorial
Upvote 0 Downvote
F

VB.NET:
And now it say's that ListBox1.Items.AddRange(Directory.Getfiles(Inspfolder))) does not produce a value

And why would you do that? That is the exact opposite of what you should have done. This is another example of blindly doing something without thinking about what you actually want to achieve. The idea here is that you have multiple items that you want to add to a ListBox. Why would a String be a better option for that that a String array? A String array contains multiple Strings so that is the obvious choice. There's also the fact that Directory.GetFiles returns a String array, so that's what you're starting with. I understand that you're new to this but being new to programming is not new to logic. Think about what you've got and what you're trying to achieve before writing code to go from one to the other.
Why is my data not saved to my database?
MSDN: Data Walkthroughs | "How Do I?" Videos
My Blog: Custom Events | Data Among Multiple Forms
Beginner Tutorial
Upvote 0 Downvote

freddyboy said:
And now it say's that ListBox1.Items.AddRange(Directory.Getfiles(Inspfolder))) does not produce a value

You've just completely ignored the contents of post #3 there. Firstly, the whole point of calling Invoke is so that you access members of the control on the UI thread. What is the point of that if you then go and access members of the control before calling Invoke? You might think about expanding your code out into multiple lines so you have a clear idea of what individual steps are being performed. That code is equivalent to this:

VB.NET:
That makes it blatantly obvious that you're accessing members of the ListBox on the secondary thread before calling Invoke, which is exactly what calling Invoke is supposed to avoid!

Apart from that, the method you're invoking is intended to add the items to the ListBox, so why are you adding the items to the ListBox before invoking it? As the error message says, AddRange doesn't return anything and why would it? If you had taken notice of post #3 then you'd know that you are supposed to get the file paths on the secondary thread, then pass that to the delegate that gets invoked on the UI thread:

VB.NET:
The method you invoke and the delegate you use to invoke it both need to have a parameter of type String array because that is what you're passing in that contains the items to add.
Why is my data not saved to my database?
MSDN: Data Walkthroughs | "How Do I?" Videos
My Blog: Custom Events | Data Among Multiple Forms
Beginner Tutorial
Upvote 0 Downvote

No error in code but exception unhandled was appear during debugging